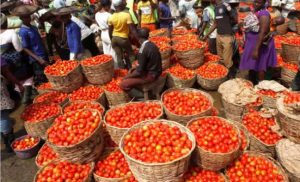 Lagos State Governor, Akinwunmi Ambode had pledged that the new Mile 12 Market would be ready in six months when he visited the site earmarked for the new market in April 2016.

However, uncertainty still trails the actual relocation of the Mile 12 Market from Kosofe Local Government Area to Ikorodu.

A visit by NAN correspondent to the proposed site of the market in Ikorodu revealed that apart from the construction workers’ office, no structure had been erected at the site.

It was, however, observed that work on the reconstruction of the road network of the new market site into a dual carriage was in progress.

Besides, work on the drainage system at the site was ongoing and a tractor was on-hand, clearing the area.

Heaps of laterite, gravels and white sand, stocked for the construction of the road and drainage systems, dotted the landscape of the site.

The Site Supervisor on duty, Mr Taiwo Bello, however, said that construction work was ongoing inside the 35- hectare market site.

“Work is going on inside but you cannot go beyond this area where they are constructing the road network.

“I will not allow you to take photographs also.

“It is only the overall head that can grant you such permission,’’ Bello said.

The decision to relocate the Mile 12 market to a new site at Imota was taken in March 2016, following a clash between Hausas, Yorubas and residents of Agiliti/Maidan.

The clash was provoked by an accident in which a commercial motorcyclist knocked down a pregnant woman.

The state government closed down the market on March 3, 2016, but reopened it 14 days later after some peace talks which involved all stakeholders.