There was a man named Fela Anikulapo Kuti, Whose well-documented life, times and tragic passing is legendary. His works live on and his music, Afrobeat, which he created ranks sacred as the classics of Mozart and Bach. His message was of activism and the path he towed was against the ruling force of his time. So the propaganda went out and his iconic status was distorted by the state-controlled media, but what they didn’t tell you was

1. He Was Super Smart

A genius for all time, Fela was born into a family where intelligence reigned supreme. It was in his DNA. His mother Funmilayo Ransome-Kuti was a leading activist in the anti-colonial movement. And his father Reverend Israel Oludotun Ransome-Kuti, apart from his divine calling as a Protestant Clergyman and school principal, he had the distinction of being the first president of the Nigerian Union of Teachers (NUT). The intellectual distinction flowed down and wide as his brothers Olikoye Ransom-Kuti (Former Health Ministers) and Beko Ransome-Kuti were both distinguished in the field of medicine. He also had a relation who won the Nobel Prize. Yes! You heard me right, Prof. Wole Soyinka was his first cousin.

Away from clan Kuti, the maestro Fela was a phenomenon. Guess you didn’t know that in 1967, he took a soul-searching trip to Ghana and returned with revolutionary music. Afrobeat was his gift to humanity. He spent time in medicine, and also as a radio producer.

His music which smacked of genius was an original potent mix of Funk, Jazz, Salsa and Calypso with Juju, Highlife and African percussive patterns delivered to the people in the endearing pidgin English. He intelligently shunned all the grandiose verbiage that schooling in the UK gave him and connected on a basic scale with his worldwide audience. His song titles ranged from the poetic to the hilarious allegory.

Finally, whoever shared a stage with Bono, The Neville Brothers, Carlos Santana, and also had in excess of a million people weeping at his burial had to either be Einstein or Fela Anikulapo Kuti. 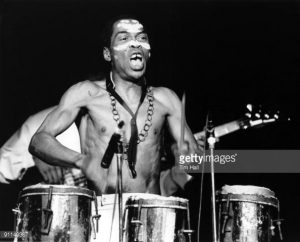 2. He Was A Philosopher

There are no huge dusty intelligent volumes and books sitting in great libraries with Felaism as their subject, but whoever listened to his music and had a passing interest in his lifestyle would feel a subtle, but abrasive philosophy hitting at your subconscious core.

The world Fela had his existence, and the world as Fela saw it, where in reality never going to move in sync. Fela’s innate philosophy was a novel variant of Utilitarianism (For the greater good), interspersed with domestic Hedonism (Pleasure). This unlikely blend of ideals was a core operational theme evident in his legacy to posterity.

His Utilitarian persona was expressive in his music and activism. A man for the people, who always was in identification with the underdogs of the Nigerian society. Well-documented was his vocal stance that less-privileged prostitutes should be pitied, and afforded ample legal protection.

He was inconsistent, but dogmatic. Believing in a free world of love, mutual sharing and sacrifice. A blatant lack of those lofty ideals in a Nigeria wallowing in poverty, strife and endemic corruption led him onto a path of activism which gave him a tale of brutal police beatings, near-death encounters with the military, and victimization by the flawed court system.

3. He Deeply Was Religious

Though not in the way you’ve been brought up to agree with. Throwing off the shackles of the Judeo-Christian and Islamic-Arab belief systems, Fela took up a Promethean religion to which he gave no name.

His religion was one in tune with the natural cravings of the flesh, and a bit of the Yoruba traditional religion. He created a commune, Kalakuta Republic, themed by music and spirituality and declared them independent from Nigeria, the flawed sovereign entity.

His faith was mercurial and accommodating. Self-indulgence and uncompromising love was a central cornerstone. So was honour and the principle of equality. His religion was of the tenet that the natural and basic cravings of man, including carnality is not to be repressed. And it expressed itself in his life.

4. He Had A Large Bleeding Heart

Fela was not the best candidate for sainthood, but his message was love. Love to one, love to all, and love for nature.

His large heart, stirred by the torturous suffering and lack affecting the masses, in a land of financial and mineral abundance, set him on his activism. Activism was evident in his music, glaring in his lifestyle, and shocking in some forms of its manifestation.

Love, intrinsically is an emotion that bestows might, and Fela had that in abundance. Power, founded on love. Mixing that with a will of steel, Fela’s large heart bled and fought for the trampled. A huge career of confrontation took a nasty turn in 1977. Fela and his band, Afrika’ 70 released an album titled Zombie. The moniker Zombie was a direct reference to the deadly operational ways of the military. So they responded with brute force and savagery. A thousand soldiers attacked the commune, mobbed Fela, threw out his aged mother from a window which caused her fatal injuries that led to her death, burnt the Kalakuta Republic, the studios, and musical instruments. But Fela cowered not. He marched on in belief. A bastion of hope and defiance.

And on the home front, the large heart created a large family. I bet you saw this coming. Ladies flocked around the enigma that Fela was. Something about his appetite for life and his celebrity status made women all over battle for a piece of him. And there was enough of Fela to go round. 27 women once graced his bed, followed by another simultaneous 12. And he delivered the goods. Fela, an inspiration to 2face.

Fela was a follower of Pan-Africanism and Socialism. He was a champion for the sanctity of human rights. A staunch supporter of traditional religion and lifestyle, Kuti abhorred colonialism. A striking feature of his life was his refusal to adapt to the Western ways. He bled Africa. Polygyny was his way, and so was his love for the truly African beauty which he fondly referred to as ‘Market Woman’. (Remember the ‘Lady’ song?).

Not content with fighting from his studio, Fela took it to the media. He bought spaces in the Daily Times and The Punch, two influential national tabloids on which he ran outspoken political columns throughout the 1970’s and the early 1980’s. He titled the columns ‘The Chief Priest Say’.

He formed his political party, Movement of the People, and in 1979, he put himself forward for President, but his candidature was refused.