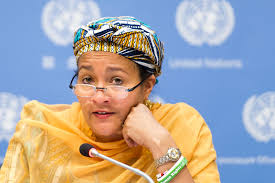 was one of the six women that made the cut as a minister under the present administration of President Muhammadu Buhari. She is the new UN Deputy Secretary General and below are some of the things you may not know about her.

1. Amina J. Mohammed was born 1961 in Kaduna State and is of Gombe descent with a British mother and a Nigerian father.

2. From 2002-2005, Ms. Mohammed coordinated the Task Force on Gender and Education for the UN Millennium Project.

3. She has served as the Special Adviser on Post-2015 Development Planning to United Nations Secretary-General Ban Ki-moon.

4. She served as the CEO and founder of the Think Tank Center for Development Policy Solutions.

5. She worked as Senior Adviser on Millennium Development Goals (MDGs) to three different Presidents of Nigeria from 2000 – 2014.

6. She has six children.

7. She received the National Honors Award of OFR in 2006 and was inducted in the Nigerian Women’s Hall of Fame in 2007.