Home National News 7 things you didn’t know about the Oba of Benin that will...
Facebook
Twitter
WhatsApp 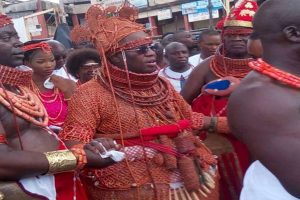 The new Oba of Benin, Omo n’Oba n’Edo Uku Akpolokpolo, Oba Ewuare II was crowned and handed the staff of office by the Governor of Edo state in 2016.

We present to you 7 amazing things you should know about the new Oba, previously referred to as Prince Eheneden Erediauwa.

2.) He attended the famous Edo College in Benin from 1965 to 1967 and also bagged a degree in Economics and Sociology from University of Wales, UK.

3.) He has served as Nigeria’s Ambassador to many countries including: Norway, Angola, Sweden e.t.c

4.) He is an astute business man with several interests in the petroleum, agro-allied and construction industries. He is the founder of South Point Royal School, Benin, and the non-governmental organisation, Benin Royal Dynasty Trust.

6.) He was widely reported to be the 39th Oba of Benin but he dismissed this after he officially recognised Oronmiyan, the founder of the yourba race, as the first Oba of Benin. Thereby making him the 40th Oba.

7.) He was recently blessed with a son named Prince Igbinosa Erediauwa