1.) It is already a widely-known fact that Cristiano Ronaldo was named after the American president Ronald Regan, who swapped his movie career for politics and had been sworn in his second term in the White House just a month before Cristiano was born.

A story about his childhood nickname is not that popular however. Little is known that the Portuguese star was nicknamed ‘crybaby’ due to his expressively emotional nature. It was a nickname kids at school gave him since he would get so emotional whenever he would pass the ball and his teammates did not score.

2.) Cristiano Ronaldo got expelled from school at the age of 14 and for an utterly bizarre reason. The Real Madrid forward threw a chair at his teacher, who – according to Ronaldo’s claims – disrespected him.

The Portuguese international ‘was not thick’, it was only that he was not interested in school as at the age of 14 he began to be aware of his potential.

3.) Ronaldo’s football career was placed under serious doubt only year later when then 15-year-old boy Cristiano was diagnosed with a racing heart. This heart condition could have ended his football career in total, but a laser operation was performed to cauterise the problematic area which was causing the problem and Ronaldo resumed training only days after the intervention to continue his impressive development.

4.) Cristiano Ronaldo started his career at his hometown club Nacional and only three-day trial was enough to convince Sporting CP to sign him. The Portuguese international made his debut with the Portugal powerhouse at the age of 17 against Inter Milan. His Primeira Liga debut came shortly afterwards with Ronaldo impressing right from the start with two goals in a 3-0 win over Moreirense.

5.) Before his record-breaking £12.24 million move to Manchester United in 2003, which made him the most expensive teenager in English football and the first-ever Portuguese to play for the Red Devils, Cristiano Ronaldo could have easily become a Liverpool player.

Gerard Houllier was keen to land the talented teenager, but financial issues prevented the deal from coming through, opening doors to Manchester United to finalise the deal.

6.) Football fans are well aware of his footballing records which are consisted of various trophies won on club, national and individual level, but there is a record not many of you will be aware of.

Cristiano Ronaldo’s Real Madrid presentation remains to this date the most-attended one in world football. Over 80,000 people gathered in Madrid to create an unforgeable memory for Cristiano Ronaldo and to break a record previously held by one and only Diego Armando Maradona who amassed 75,000 Napoli supporters and fans back in 1984.

There are rumours about a surrogate mother, and all we know thus far is that the boy was born in the United States and that his mother is Portuguese. Other speculations argue that the mother is a waitress Ronaldo once dated for a short period of time. 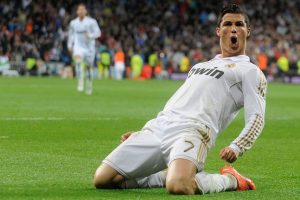