The Special Assistant to the President on Foreign Affairs and Diaspora, Mrs Abike Dabiri-Erewa ,has urged all Nigerian irregular migrants facing deportation in Germany and other countries to return home voluntarily.

Dabiri-Erewa gave the advice when she spoke with newsmen in Abuja on Friday. She said that the call became necessary because most Nigerian migrants in those countries trying to seek asylum might be denied and eventually deported.

She said, however, that if they chose to come back voluntarily, they could get into the reintegrated programmes which the German government organised for such people. “If they return voluntarily, they will be given some amount of money by Germany to start a new life with entrepreneurship training that will be provided.

“But if they refused to come back voluntarily, they will be deported and there will not be anything for them and they may not have the chance of going back. “That is why it is advisable for them to return voluntarily because they can always apply and go back to the place,” she said.

Dabiri-Erewa said that for any Nigerians in Germany who would want to return home, the country would provide a better place for them that would help them live better lives. “Germany has Ministry of Internal Affairs that has budget for returnees through which some services are provided for those categories of people,’’ she said.

Germany had through its Federal Ministry of Economic Cooperation and Development inaugurated a scheme known as “assisted-voluntary returnees of Nigerians irregular migrants in Germany’’. Through the scheme, Germany offers a humanitarian aid that makes it possible for asylum applicants to voluntarily return to their home country permanently. 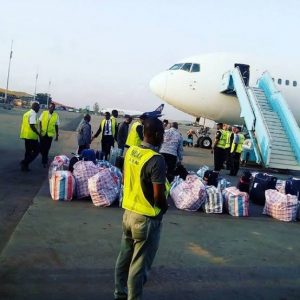