The Acting President of Nigeria, Professor Yemi Osinbajo, directed the Minister of State for Petroleum, 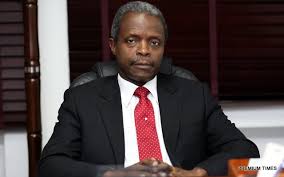 ,yesterday (Thursday) to engage with International Oil Companies on the way forward over repeated calls for the relocation of their head offices to the states where they produce oil from.

Most of the IOCs in Nigeria have their headquarters in Lagos, south west of the country, hundreds of kilometers away from the oil-rich Niger Delta region.

The Niger Delta people have long complained that while oil exploration activities have polluted their environment, the IOCs were paying taxes and other benefits to another state.

Mr. Osibanjo, who was responding to the requests made by various interest groups in Akwa Ibom State during the town hall meeting he had with the people of the state, said the federal government was proposing a new vision for the people of oil producing communities.

The American oil giant, ExxonMobil, is one of the IOCs operating in Akwa Ibom, but with its head offices in Lagos.

Prof. Osinbajo said, ”The majority of the people of these communities, including the oil producing communities here in this state, have heard of the wealth that oil has brought, but have hardly benefited from it.”

He said this at the Government House banquet hall to an excited crowd of indigenes which included the state governor, Udom Emmanuel, the Senate Minority Leader, Godswill Akpabio, and the Managing Director of the Oil and Gas Free Zone Authority, OGFZA, Umana Umana.

Mr. Osinbajo admitted that the blessings of oil have sadly become a curse for the people.

He said that he and his entourage were visiting the state on behalf of President Muhammadu Buhari.

Nduese Essien, a former minister of Lands, Housing and Urban Development, for instance, told the acting president that the Department of Petroleum Resources, DPR, which is a subsidiary of the Nigerian National Petroleum Corporation, NNPC, has no befitting office in the state.

Mr. Essien, who is also a former member of the House of Representatives, said the DPR was operating from a rented two-bedroom apartment in Eket, adding that NNPC itself has no single office in Akwa Ibom, despite the fact that the state was the largest oil producing state in the country.

Mr. Essien said, ”When they (NNPC workers) come to Akwa Ibom to supervise oil production, where they are joint venture partners with oil companies, they stay in the tents provided by the oil companies,”And you know what that means.

“None of the NNPC subsidiaries is located in Akwa Ibom State. There’s no oil depot in the state for refined petroleum products. The communities are neither stakeholders nor shareholders in the oil business.

”Apart from the 13 per cent oil derivation money paid to the state government, the oil producing communities in Akwa Ibom have nothing to show for several years of oil exploration in the state.

”The federal government has shown no interest in meaningful development and presence in the areas, other than providing policemen and other security personnel in the area.

”They only provide policemen and other security to ensure that oil flows uninterrupted in the area.

”The oil services companies come from outside Akwa Ibom with their workers whose taxis are paid to their places of residence. The auxiliary benefits and the multiplier effects of operating in the oil producing area are therefore lost.”

Mr. Essien also said the story of oil exploration in the state was “the story of woes”, and added that the state was exceptionally peaceful in the Niger Delta region because the elders prevailed upon the youth not to bomb oil pipelines.

He reiterated the demand of the people that oil companies operating in the state should move their headquarters to the state.

”Today, all those impediments ranging from lack of airport, road network, housing, and accommodation have been conquered. They don’t have any excuse not to move their headquarters to Akwa Ibom.”

Both the acting president and the minister of state for Petroleum praised the Akwa people for not resorting to the bombing of oil pipelines.

Mr. Kachikwu promised that he would ensure that NNPC establishes its presence in the state.

”This state is not just known as the highest producer of oil in Nigeria, it is also the most peaceful state,” Mr. Kachikwu said. “I would not have been able to deliver some of the results we are seeing today without the support of the people of this state.”