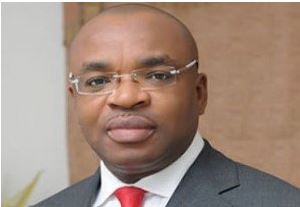 The industrialisation programme of Governor Udom Emmanuel -led administration in Akwa Ibom State will record another leap with the test run of a 300million capacity syringe manufacturing company slated for May this year.
Governor Udom Emmanuel announced this when a team from World Bank Group (WBG) led by the Country Director, Mr. Rachid Benmessaud called on him at Government House, Uyo.
Governor Emmanuel said, “Nigeria with over 170 million people consumes about 6 billion syringes imported from foreign countries and the next largest producer of syringe is South Africa but Nigeria has no single Syringe Manufacturing Plant. This explains why we are taking steps to establish one in the state. “
Mr Emmanuel spoke of the World Bank as a dependable development partner and solicited its partnership in the execution of development programmes in the area of Small and Medium Scale Enterprises, Agriculture, Health Care, Women Empowerment and Environmental Degradation.
The governor said that the state has set up modalities for effective implementation of its laudable programmes by constituting technical committees to handle the various areas of projects implementation saying that the committees are headed by tested hands who would deliver on their assigned task.
He assured that the state will meet its obligations in the area of counterpart funding of projects and enthused, “In the area of counterpart funding, we would meet our obligations whenever we arecalled upon. This is one state that would make good use of the funds earmarked for projects… so if we partner we would create something that the whole of Africa will emulate.”
Governor Emmanuel said that the state is blessed with resources that could readily be harnessed to generate employment, create wealth as well as sustain the economy and mentioned the Coconut oil Refinery Project as one project that would fast- track economic growth given the international market price of the commodity.