Details of the incident, which was said to have occurred at the Air Force Base in Makurdi, the Benue State capital are vague and but  officials have yet to confirm it.

However,a friend of the deceased female Air Force official, known as Shomzy Shomzy to her colleagues, have taken to the Facebook page to express her shock over the incident. 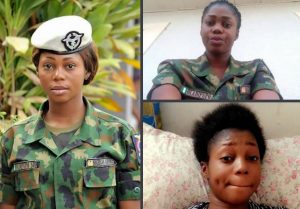 “R.I.P Shomzy shomzy your death is some thing I can’t forget so easily because your military plans is still in your mind. Well I can’t continue crying my dear, all I have to do is to let go of what I can’t change,” One of her friends wrote on Facebook.