Lagos State Governor, Akinwunmi Ambode on Saturday has hailed the efforts of his predecessor, Babatunde Fashola, the  Minister for Work, Power and Housing, made his first official to the seat of government since hand over in May 2015.

Mr. Ambode, who spoke when he received Mr. Fashola and some top officials of his Ministry on a courtesy visit at the Lagos House, Ikeja, attributed many of his achievements as governor to the “solid foundation” laid by Mr. Fashola.

Ambode said, ” I want to say that this is a historic moment for us, notwithstanding that the Honourable Minister lives in Lagos, this is the first time he is stepping his feet into the Alausa premises and we need to honour him for that and say a big thank you for coming back home.”

It was the first time the two politicians met officially at the state government’s headquarters in Lagos.

It was also the first time Mr. Ambode would publicly acknowledge the achievements of his predecessor, whom he recently accused of frustrating some of his projects. Mr. Fashola denied the claims.
For nearly two years, both men seemed locked in a cold war. Less than six months into his administration, Mr. Ambode revoked a 50-year concession contract for the redevelopment of the highbrow Falomo Shopping Centre awarded by Mr. Fashola.

During the same period, details of some outrageous contracts awarded by Mr. Fashola, including one in which he spent N78 million to upgrade his personal website, leaked to the public.
At a town hall meeting late last year, Mr. Ambode spoke of how he was running his government N3 billion less than what his predecessor had been spending. 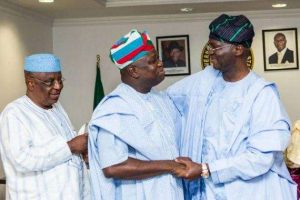