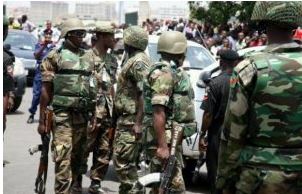 The Nigerian Army has said that it arrested 7, 898 Boko Haram terrorists and killed about 48 between 2nd February and March 1st 2017 in its clearance operation in Borno and Northeast.

The Army also paraded 3 female Boko Haram suicide bombers arrested within the said period in its courses of operation.

He also disclosed that 8 foreigners were among the terrorist arrested in the operation , adding that they comprised 4 Chadians, 3 Nigeriens and one Cameroonian .

“The Command was able to kill a good number of terrorist , recovered good number of heavy weapons and ammunition with the destruction of over 301 Motorcycles belonging to the terrorists. We also lost some of our men while others sustained various degrees of injuries.

“Over 6 female Suicide Bombers were intercepted at various points of operation including muna garage , NNPC Mega filling station area among others .

“I want to use this medium to condemn the amnesty international report on military operations in the Northeast as the report is not only baseless but malicious as they cannot love Nigeria that Nigerians,” Irabor said.