The Chairman, Senate Committee on Land Transport, , has commended the commencement of the new Lagos-Ibadan standard gauge rail project, while affirming that it is a fulfillment of one of the promises of the All Progressives Congress (APC) to the electorate.

Ashafa said this on Tuesday at the opening  ceremony of the project in Lagos State, southwest Nigeria.

He said, “One major aspect of this project is generation of employment.

“At least 250,000 jobs will be created through this project and people will be employed directly for the construction of the railway project. 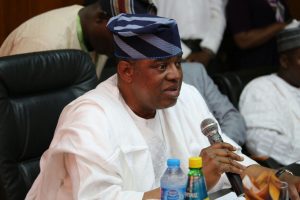 “The project will bring a positive change to the economy of the people and traders will also benefit in the development.”

The lawmaker hinted that the Lagos to Kano and Calabar rail projects are also priorities of the present government, saying their approval is being debated at the Senate.

On his part, the APC National Chairman, John Oyegun, stated his optimism that the Lagos–Ibadan rail project would hasten development through creation of jobs and economic growth.

“The rail project is going to professionalise transportation and save the country from constant road repairs.

“The project will advance the transportation system in the country,” he said.

The rail project was awarded to China Civil Engineering Construction Corporation by the Federal Government at the cost of 1.5 billion dollars (about 458 billion Naira).