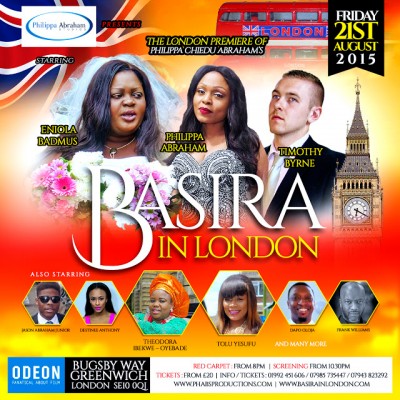 Basira In London is definitely on its way to joining the league of Nollywood comedy flicks that have broken box office records. Resting on the heels of London based producer, Philippa Abraham, ‘Basira In London’ will be hitting the Nigerian cinemas from March 24, 2017.

Basira In London was first premiered in the United Kingdom in August, 2015 to a sold out crowd in all of its six showings at the Odeon Cinemas. Anticipation has hit the roof as to when it will be premiered in Nigeria and fans will have the opportunity of seeing the movie. Thankfully, that expectation will be met from March 24, 2017 when all cinemas nationwide will start showing the movie.

‘Basira in London’ is a hilarious comedy-drama that tells the story of an African woman (Eniola Badmus) who relocates to London with great expectations. The culture clash and her efforts in trying to fit in make this film ‘unmissable’.

The movie gives stamp to the premise, ‘you can take a girl out of Nigeria but you cannot take Nigeria out of the girl’. The movie stars favourite Nollywood big girl, Eniola Badmus, Jason Adedeji-Abraham, Destinee Anthony, Tolu Yesufu, and Theodora Ibekwe-Oyebade. The movie is produced and directed by Philippa Chiedu Abraham, who also starred in the movie.