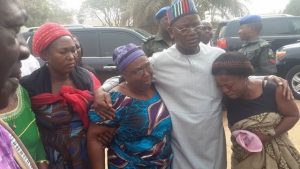 Governor of Benue State, Samuel Ortom escaped death by the skin of his teeth on  Tuesday when a commercial Carina ll Toyota car rammed into his convoy.

The incident occurred when the governor  was returning from Zaki Biam, where he had gone to carry out an assessment of the attack by gunmen on International Yam Market, when the accident occurred.

The Chief Press Secretary to the governor, Mr Terver Akase said the accident occurred about 4:30 pm between Abakwa and Adi in Buruku local government area.

He said an oncoming vehicle, Carina Two, left its lane and hit the Nigeria Union of Journalists’ bus which was on Governor Ortom’s convoy.

According to him, no life was lost in the incident but one occupant of the Carina car sustained head injuries and was taken to hospital on the directive of the Governor.

The state’s NUJ Chairman, Comrade Kris Atsaka, who was on the bus also sustained minor injuries.