Abubakar Shekau, leader of Boko Haram threat to the World Leaders has continued,  as he vows 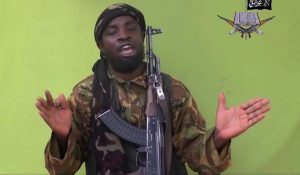 to create an Islamic caliphate across West Africa in a new propaganda video that threatens world leaders.

Shekau, in a new video, said the militants who have pledged allegiance to the Islamic State group, also known as ISIS, will establish Sharia law in Nigeria, Benin, Cameroon, Chad, Niger and Mali.

The 27-minute video was reported by local media Friday. It comes as Cameroon declared last week it had rescued 5,000 hostages from Boko Haram in an operation along the Nigeria-Cameroon border.

“You are telling lies that you killed 60 of our men and rescued 20 children, and that you rescued 5,000 of your people, Paul Biya,” said Shekau in the video, referring to Cameroon’s president. He added that Boko Haram remains strong in Nigeria, and took credit for suicide bombings in the city of Maiduguri in the northeast Nigerian state of Borno, Reuters reported.

Nigeria’s military has claimed at various points that it had killed Shekau. Each time, Boko Haram has released a video featuring a man claiming to be Shekau insisting that the deadly militants are as united as ever.

Cameroon said in its latest announcement that it had killed 60 Boko Haram fighters and destroyed the group’s hideout along the Nigeria-Cameroon border. “[The] hostages freed consisted mostly of women, children and elderly people,” Communications Minister Issa Tchiroma Bakary told a news conference. He later clarified that “the 5,000 people were saved after a sweep at the border within Cameroonian territory … who were hostages that could not leave the villages.”

More than 15,000 people have been killed by Boko Haram and at least 2 million people have been forced from their homes since the group began its insurgency in 2009. Boko Haram seeks to impose strict Islamic law in Africa’s most populous nation. Boko Haram’s name means “Western education is sin.” The militants have also attacked neighboring Cameroon, Chad and Niger in recent years.

The latest Boko Haram video opens with an image of the ISIS logo. Shekau announced his allegiance to ISIS in March 2015 and ISIS leader Abu Bakr al-Baghdadi later reportedly accepted the statement in part to grow the terror group’s global reach.