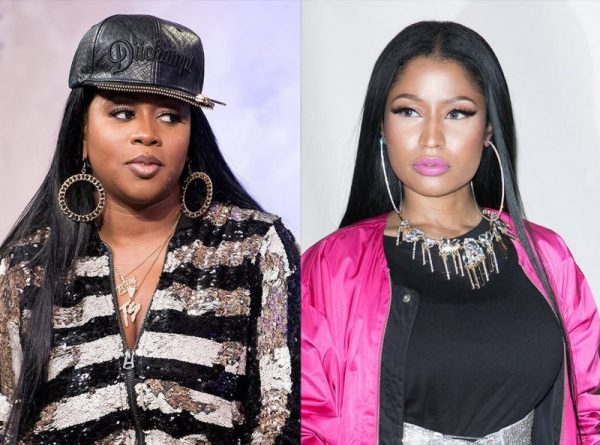 American rapper, Remy Ma has in an extensive interview granted during a Facebook Live interview for Buzzfeed’s “Another Round” live podcast, opened up on her rap feud with female MC, Nicki Minaj.

Coming after Remy Ma released two diss tracks aimed at the opponent, the rapper in the interview granted on Tuesday Night at the New York’s women’s club, The Wing, admitted she wished she could have worked with Nicki Minaj instead of releasing the diss tracks to tear her apart.

While speaking with the hosts, Heben Nigatu and Tracy Clayton, Remy Ma who accused Nicki Minaj of sleeping her way to the top of the rap game had called the rapper several names in her tracks making reference to ger fake butt and claiming her lines weren’t hers.

She however in the interview said: “I do not condone or recommend the tearing down of another female.

“It just bothers me that this record that I put out where it’s literally picking apart a female went so viral, and every media outlet wants to talk about it and pick it up; I feel like we could’ve done the same thing working together. I just personally think it would’ve been so much cooler…if we came together and made something crazy. It could’ve been totally different.”

She continued: “I don’t regret it (SHETHER), but I’m not particularly proud of it either.” She also described the process of recording the track, which set the internet on fire upon its release on February 25. According to Remy, she didn’t notice how long the recording was.”

Remy Ma during the interview admitted that she kept going on and on as she said: “I didn’t realize it was seven minutes until after it was done,” she joked.

“Have you ever had an argument with your man where you go in and you realize after, like, I was cursing him out for the last three hours? Shether’s success was ultimately a bad sign for women in the industry.

She added: “It just bothers me that, this record that I put out, where it’s literally picking apart a female, went so viral.”

Remy Ma added: “We could have done the same thing, working together. I would have liked that so much better that way.”

Remy Ma, in response to a question posed on why she didn’t work with Nicki Minaj said: “It wasn’t me. You can’t force somebody to do something they don’t want to do.”

Charly Boy’s Daughter, Dewy Slams Follower Who Told Her To Change Her Sexuality