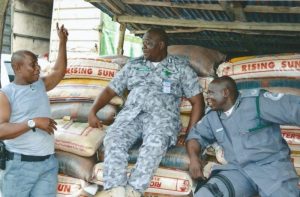 The Senate has resolved to probe the Nigerian Customs Service (NCS) over the raiding and carting away of goods in shops at a rice market in Sango-Otta, Ogun State.

The Upper Chamber came to the decision after a brief debate over a motion moved by Senator Gholahan Dada under Order 42 & 52, over the unlawful seizure of rice and invasions of shops by the customs in Ogun State.

While the Senators agreed that the Customs  has power under the law to carry out raids, it resolved to carry out the investigation to know if the Customs did not step out of the ambit of the law.

The decision to probe the Customs’ actions was reached after Senate Majority Leader Senator Ahmed Lawan argued that it was necessary for the legislature to look into if the Customs did not do anything wrong while carrying out the raid.

A protest by angry youths and rice sellers in Ogun is reportedly turning violent at the Sango-Ota area of the state with the participants blocking the two ends of the Lagos-Abeokuta expressway.

Recall that a violent protest by rice traders broke out on Wednesday, February 22, over alleged invasion of their markets by officers of the Nigerian Customs.

The rice sellers alleged that the customs officers stormed their shops and stalls at the Sango-Ota market around 1 a.m. to confiscate their goods even though not smuggled such.

Scores of the rice sellers later on Thursday, February 23, protested to Ogun state Governor Ibikunle Amosun’s office at Oke Mosan in Abeokuta to register their displeasure at the actions of the Customs.