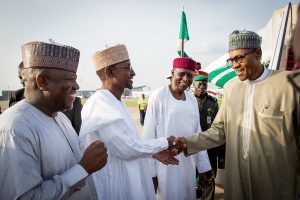 President of Nigeria,  Muhammadu Buhari said on Friday he would need more rest and health tests after coming home from nearly two months of medical leave in Britain during which his deputy, Yemi Osinbajo, stamped his authority on economic policy.

Shortly after arriving back from London, the 74-year former general told officials he was feeling “much better” but wanted to rest over the weekend, raising questions about his ability to run Africa’s biggest economy and most populous nation. Osinbajo, a lawyer who is seen as more business-friendly than Buhari, played an active role in driving policy changes in Africa’s top oil producer during the president’s seven-week absence.

The Nigerian stock market jumped to a one-month high when Buhari returned, but trimmed gains after his comments about his continued ill-health raised fears of policy confusion and a power vacuum. Dressed in a dark kaftan and Muslim prayer cap, Buhari walked stiffly but unaided from his plane after it landed at an air force base in the northern city of Kaduna.

After greeting a handful of provincial and military officials, he boarded a helicopter to Abuja to address Osinbajo and his top military and security commanders in a brief speech.

“I deliberately came back towards the weekend so that the Vice President will continue and I will continue to rest,” Buhari said at the presidential villa. “All I need is to do further follow-ups within some weeks.”

He said he was “conscious” of the needs of the economy, mired in its first recession in 25 years due to a collapse in oil revenues, but failed to clarify Osinbajo’s role or the extent of his powers now Buhari is back home. Buhari had formally made him acting president when he left for treatment, but that appointment can only stand when the President is out of the country. Buhari also did not reveal details of his sickness.

“I couldn’t recall when last I had a blood transfusion,” he said. About his treatment in London he added: “Blood transfusions, going to the laboratories and so on and forth.”

Buhari has travelled to Britain several times to consult doctors since his election two years ago. Officials have refused to disclose details, saying only that he had undergone routine tests. This fuelled speculation that his health was worse than publicly admitted.