President of Nigeria,  Muhammadu Buhari, is currently having a meeting with the Senate President, Bukola Saraki, and Speaker of the House of Representatives, Yakubu Dogara.

The lawmakers arrived at the Presidential Villa in Abuja, at about noon.

This is their first meeting with the President since he returned to the country, after a 49-day vacation in the United Kingdom.

The President on Monday resumed duties at his office and sent a letter of resumption to the National Assembly and House of Representatives.

In a press statement by the Special Adviser to the President on Media and Publicity, Femi Adesina,”In compliance with Section 145 of the 1999 Constitution (as amended), the President has formally transmitted letters to the Senate and the House of Representatives, intimating the National Assembly of his resumption.

“I have resumed my functions as the President of the Federal Republic of Nigeria with effect from Monday, March 13, 2017, after my vacation.” 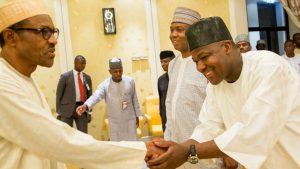