Cameroon has ordered more than 2600 Nigerians who fled Nigeria to escape from the hands of Boko Haram jihadists since the start of the year, the UN said Tuesday.

Thousands of Nigerians have been displaced by the Boko Haram insurgency, which has seen deadly attacks since 2009 in pursuit of a caliphate in northern Nigeria.

Some 85,000 have sought refuge in Cameroon but the UN refugee agency said many had been sent back, with officials citing security reasons.

“So far this year, Cameroon has 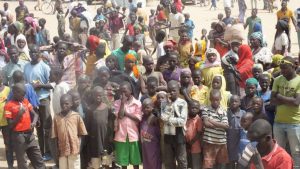 forcefully returned over 2,600 refugees to Nigerian border villages against their will,” UNHCR spokesman Babar Baloch told reporters in Geneva.

He said UNHCR staff in Nigeria had heard and documented accounts about Cameroon troops forcing refugees to return to Nigeria, “without allowing them time to collect their belongings.”

Baloch pointed to a case where refugees were rounded up during a military offensive against Boko Haram insurgents in the Mandara Mountains on the Cameroonian side of the border. They were then taken in trucks to a camp for displaced people in Banki, in Nigeria’s Borno State.

“Those returned included a one-year-old child and a nine-month pregnant woman, who gave birth the day after her arrival in Banki,” he said.

“During the chaos, families were separated and some women were forced to leave their young children behind in Cameroon, including a child less than three years old,” he added.

The UNHCR said it was particularly alarmed to see that the forced returns were continuing unabated after its previous protests and even after the governments of Nigeria and Cameroon signed an agreement with the UN on March 2 to ensure voluntary returns when possible.

“While recognising the legitimate national security concerns of the Cameroon government, UNHCR reminds authorities that refugees are themselves fleeing violence and attacks from Boko Haram and that their access to asylum and protection must be ensured,” the agency said.

Baloch stressed that the forced return of asylum seekers and refugees constitutes refoulment, which is a serious violation of international law.

Though Boko Haram was born in Nigeria, the Islamic State-affiliated group has carried out frequent attacks in Cameroon, Chad and Niger, prompting the formation of a regional force to fight back.

Some 200,000 Cameroonians from the Far North region near Nigeria have left their villages in fear of the violence.