Modupe Bankole, a 51 year old mother of three died after the balcony of a one story building which she resides in with her husband, collapsed at Olomore area of Abeokuta, Ogun State capital yesterday March 13th.

Narrating how his wife died, her husband, Mr Bankole, said she was at their balcony relaxing on a mat when the balcony caved in. She was shouting that her back was aching but died as soon as she was rushed to the hospital.

“I just heard the collapse of the balcony on my head and I noticed it had a minor effect on me. I thought since my wife was not directly under the collapse balcony, she would be safe. Then I ran to the other side of the building shouting thank you Jesus. I wanted to come back when I heard our neighbors calling my wife to get up from the mat she was sleeping but she could not. We did not know if some of the debris hit her on her back because she was just shouting ‘my back’. She died shortly after getting to the hospital” he said. 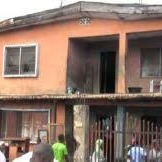