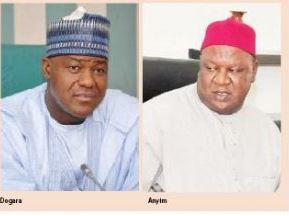 Just at the close of Fridays hearing, Hembe revealed that ownership of the Centenary Company Plc. has been traced to the merger of two different companies, which are Basic Start Ltd and Company First Limited owned by one Paul Oki and Bome Ozobia. According to the committee, the two companies have 10, 000 share capitals.

This suggests that the project is anchored on a false premise as the two companies; by the virtue of their share capital has no capacity to handle such a huge project. The Centenary City projects saddled with the task of developing of 1,267 Hectares of land.
My experience with EFCC is that they are all professionals, trained to do the job they are doing. What Iam told is that there are about 8000 cases before them. There is no way 8000 cases will be exactly the same, there must be differences. So far I know many people have been cleared. These 8000 cases are from companies, organizations and individuals. Even some companies have performed jobs but have not been paid, so government is owing them. They will handle cases based on the nature of the case because no two cases are exactly the same. If you ask me if they’re handling their jobs well, I think so from my interaction with them. They are focused and trained and doing well”.

What is the status of your case with them, especially the one that has to do with Dasuki, where is the case now?”
The case has been cleared; in fact I was cleared two days after I went to them. There was no case, I’ve been cleared formally. What they did was that every transaction in that office was investigated. So, if there is any interaction between you and that office, they call you. The case with me had nothing to do with arms deal. The arms deal was from 2015, and that was why I said they have about 8000 cases, cases that came from appropriated funds, by federal legislators to the president then, who had the powers to spend through the office of National security Adviser on security issues. I am aware that other cases have been cleared like I was cleared and others who are being owed will be paid. That’s what I know, so as far as I’m concerned, they are doing their jobs.

What would be your reaction if some link your clearance to your membership of APC?”
If that is the way you look at it, then I shouldn’t have been invited in the first instance. The way my case was advertised was shocking. Look at the amount, it was nothing to write home about, even the money wasn’t with me, it was with the lawyer who was handling the purchase of the property. About two weeks before I was invited, we were still looking for the property, went to inspect the property. I voluntary gave them the money because we couldn’t buy.

Your party is accused of contributing to the crisis within the PDP. What do you make of such claim?
Here you go again, I’ve tried to make you understand that what is causing the crisis of PDP is internal rift. Before now , you had asked me question about the internal rift within APC . Why would APC be blamed for crisis in PDP ? Why is APC not blaming PDP for its own rift? It has been like this since I ventured into politics, CPC for example in 2011, we were hoping to have about 12 states in the north, we ended up with one state. We didn’t even contemplate it . It was because of crisis. I’ve never been to police station for anything in my life, but because of politics we even went to court with someone who came from PDP. I wouldn’t say it was PDP that did that.
Senator Sheriff Amodu is a very experienced politician, he has been a two term governor, he was in APC, and he left and went to PDP. They welcomed him; he went there with a lot of money, goods and they welcomed him. So ,now they are having problems with him why would they now start pointing fingers at APC he left. I don’t think it is about APC causing problems in PDP or vice versa, I think it has to with people trying to actualize their interest and capitalize on it. It is human nature, I’ve said it before.

You were Military governor, but in this democratic dispensation , you’ve made a couple of attempts to rule kano, have you rested that ambition?
Would I say I will not rule because of PDP? No! If you ask everyone in kano, I would have been their choice, but I didn’t have any party with me. And if you don’t have party in your position, it is difficult for you to emerge for any kind of election you go into today. We are hoping APC will change that and make people to aspire, people will elect them based on their quality and capacity. But it will take time, it won’t be an overnight issue.

What do you make of the crisis in the Kano APC chapter especially the disagreement between the Governor and his predecessor?
On a serious note, I believe at a certain point, they will come together. They have been partners twice, and they’ve been governors together. They went to the ministry of Defence together. I want to see it as a thing some of their supporters and followers are causing. You know in politics you cause problems so it can become significant and important.

Lastly, you ruled Kaduna state, we’ve seen the fighting and killings in the southern part of the state. Why have you not suggested on how the problem can be nipped in the bud?
I have the privilege to reach the governor either by phone or writing, so I don’t have to come to the public and talk. If i come out and make pronouncement, I think I’m abusing this privilege which I have . It is not every Nigerian that has it.el Rufai is the sixth governor since I left Kaduna. It has been quite a while from now, things have changed, the situation is different. It will require different handling. What I have noted is that, they have done very well so far. Police have been injected into the area. Whenever you have this kind of situation, communication would help, and he is doing very well. And I’m hoping he will get things done. What I will say to the people in the area is that, we have to live with one another. And I also want to remind us all that, if God had wanted, he would have made us exactly the same, same religion, speaking the same language, doing exactly the same thing. But God in his wisdom made us differently. Our finger prints are different, even some eyes are different. If I look like you, I will go to your house, take your best dress and go, because your wife will think you are the one.
So these differences in us, God has made it so that we can enjoy interacting with each other. With confidence and trust, if they see you, they know you are you, if they see me, they know I am me. None of us sat in any conference to elect where we will come from; who will be our parents. More than 90 percent of us are practicing religion we met our parents practicing, 99.01 percent of us actually speak the same language we find our parents speaking, and we identify with where we find ourselves . I think it’ll be much better for us. So the differences in us are made to unite us not to divide us and we should be very careful about those who try to use that to create differences amongst us. Rather we should look at those things that unite us, and improve on them; we should try and put those things that make us different aside.
This is the message that I am giving to them, so that there will be peace in the society. If there is no peace in the society nothing will happen. When we were having the problem of Boko Haram in kano commercial activities were disrupted . Kano is a commercial center, it got to a point where there were no people coming to buy things from outside the state talk less of people coming from neighboring states, which was the case for several years. There were no night markets in Kano, because by 8pm, it will be like 2am in the morning. People doing tea on the streets won’t be there, people selling food at night won’t be there, tailors will not be working , and so many things.
Secured environment is very essential for any human development.