Home National News Court remands 2 Japanese and 1 Nigerian in prison
Facebook
Twitter
WhatsApp
Two Chinese citizens and a Nigeria have been remanded in prison as ordered by the Federal High Court in Lagos on Monday. The trio who were accused of importing sub-standard automobile tyres worth about N5bn into the country.
The Judge presiding over the case, 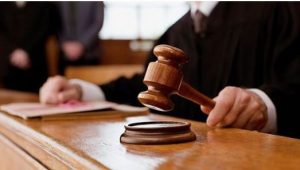 Justice Mojisola Olatoregun made the remand order shortly after the accused were arraigned before her on four counts.
The accused, who were arraigned by the Attorney General of the Federation and Minister of Justice, are Taolung Shen, Xu Jing Yao and Chinedu Madubuike.
They were arraigned alongside two companies, Sino Nigeria Limited and Nedeca International Limited.
Madubuike, who was listed as the fifth defendant, was arraigned in absentia as his counsel, Mr. Napoleon
Nwachukwu, informed the court that the accused was “seriously” sick.
In the four charges, the Federal Government accused the Chinese and their alleged accomplices of conspiring “among yourselves to import tyres, which did not meet the relevant Nigeria industrial standards.”
The accused persons were said to have allegedly stuffed various sizes of tyres into one another, an act, the Federal Government said, constituted a danger to the Nigerian populace.
The defendants were said to have committed the alleged offence sometime in the month of February 2017.
The offence, the prosecuting counsel for the AGF, Mr. Yusuff Lawan said, is contrary to and punishable under Section 26 (2)(b)(iii) of the Standards Organisation Act No. 14, 2015 Laws of the Federation of Nigeria 2004.
However, when the charges were read and interpreted to the Chinese citizens by one Fred Guichu Zhong, from the Chinese High Commission in Nigeria, the defendants pleaded not guilty.
Their Nigerian co-defendants equally pleaded not guilty.
Following their plea, the prosecutor, Lawan, urged Justice Olatoregun to fix a date for commencement of trial, adding that the prosecution had four witnesses to call to prove the charges.
Source: ( Punch Newspaper )