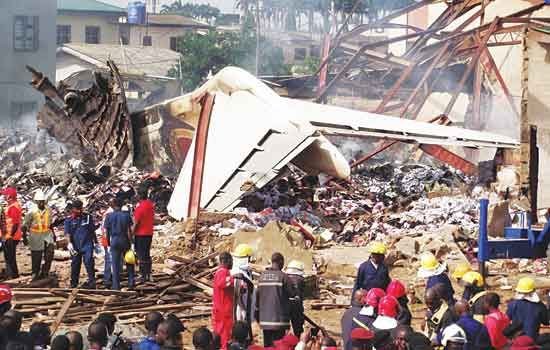 The pilot-in-command of the Dana Air jet that crashed on June 3, 2012, Captain Peter Waxtan, had previously been suspended by the United States Federal Aviation Administration (FAA) for violating safety regulations, according to a report released by the Nigerian Accident Investigation Bureau (AIB).

The accident report, which was uploaded on the AIB website and examined by our correspondent, stated that the pilot, a 55-year-old as at the time of the crash, was suspended in 2009 by the FAA for misdemeanors relating to a heavy landing and fixing panels that were neither entered in the aircraft logbook nor reported by him.

The report also revealed that Mr. Waxtan submitted unsigned recommendation letters to Dana Air and the Nigerian Civil Aviation Authority (NCAA) before being employed by the airline. Furthermore, his pilot’s license was stamped by the NCAA, but not signed by any NCAA official.

The training captain issued this evaluation on April 26, 2012, just six weeks before the deadly crash.

The regulatory body, however, could not confirm if Mr. Waxtan made the required improvements before being issued a pilot’s license.

The report also maintained that the pilot’s training was rushed.

“The captain was employed on the 14th of March, 2012. He began flying line training operations under the supervision of a training captain on the 26th of April, 2012 after completing ground school and simulator training. The background checks were said to have been done with nothing found to disqualify the pilot.

“He started flying as a checked-out captain on the 2nd of May, 2012 and had accrued over 120 hours of flight time before the accident. There was no documented evidence that the crew performed the mandatory Crew Resource Management (CRM) training.”

The AIB investigator also discovered discrepancies in the fueling records of the aircraft.

According to the AIB, fueling records indicated that the aircraft uplifted 8000 pounds of fuel before departing from Abuja while the flight crew reported to the air traffic controller on duty that they had a total of 26,000 pounds of fuel.

The AIB, in its final report, observed that “the captain was new in the company, having been employed on the 14th of March, 2012, and was checked out as a line captain on the 1st of May, 2012. The captain had previous regulatory issues with the US FAA, which led to his suspension at that time. All the reference letters presented by the captain to Dana Airlines were neither signed nor authenticated.

“The background check on the captain was inadequate. The line training given to the captain was hurriedly carried out. There was no evidence that the deficiencies observed by the checkout captain were addressed before the accident.

It would be recalled that the Dana Air aircraft crashed in the Iju-Ishaga area of Lagos, roughly 5.8 miles north of Lagos Airport.

All 153 persons on board, including six crew members, perished while another six died on ground.

During the impact sequence, the airplane struck an uncompleted building, two trees and three other buildings.

The wreckage was confined to a small area, with the separated tail section and engines located at the beginning of the debris trail.

The airplane was mostly consumed by post-crash fire. The tail section, both engines and portions of both wings, representing only about 15 percent of the airplane, were recovered from the accident site for further examination.