It was the end of the road for Mr. Tajudeen Oso as his life was taken by his employee on March 3, 2017. The empolyee who is 20-year-old,  Precious Victor, a barman at King’s Bar located at Anifowose, Mushin area of Lagos, realised that he had had enough of his bosses excesses.

According to Precious, “All I wanted to do was to threaten him a little, get N63,000 from him and run away.”

According to him, he realised he could not carry out the plan alone, so he enlisted the help of one of his friends, Kelechi, and another acquaintance, a customer named Ahmed.

But Victor said things went terribly wrong with their plan. By evening of that day, his boss, Oso, lay dead.

The man had been stabbed twice in the stomach. He bled to death on the premises of his bar.

Faced with the horror of their deed, Kelechi fled. Victor also fled in a car driven by Ahmed.

On Friday, as they were paraded before journalists at the Lagos State Police Command Headquarters, Victor and Ahmed, who were apprehended after fleeing, explained how the incident went down.

Victor said, “I live in an accommodation on the premises of the bar. Kelechi lives with me as well. I was actually introduced to my boss (the victim)by Kelechi’s boss. We discussed the plan and when Ahmed, whom I had known as a regular customer, came to the bar to drink on Friday, I also told him about the plan and he said he was interested.

“The plan was only to threaten my boss, and tell him we needed 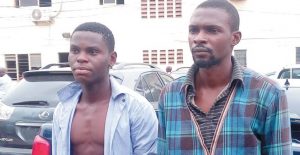 “That day, I was hiding in the kitchen when Kelechi put our plan in motion. But something went wrong. He hit my boss in the head with a bottle. When I heard noise, I came out. My boss then said, ‘Precious, you people want to kill me?’ I said no but he came towards me and bit me in the stomach. He was dragging me and would not let go.

“Kelechi was dragging him so that he could free me but when he did not, Kelechi took a knife and stabbed him twice in the stomach.”

Victor refused to say what he wanted to do with the money he wanted from his boss. All he said was he wanted to use it to do “different things”.

Ahmed on the other hand said that even though he was told about the plan to do something, he did not know the details of what Victor was up to.

He insisted that he was just a University of Maiduguri undergraduate who was at the wrong place at the wrong time.

According to him, he agreed to drive Victor away from the scene to help him but did not know that he had committed such a crime in the bar.

“I got to their bar on Friday, March 3. I was drinking when he came to me to ask if I could drive. I said yes, he gave me the car key and I put it in the ignition. It did not start. He had told me earlier in the day that he was planning to do something and asked if I was interested, I said yes even though I did not know what it was,” Ahmed said.

The Commissioner of Police, Lagos State Police Command, Mr. Fatai Owoseni, who paraded the suspects, explained that they would be charged to court as soon as investigation into the case was concluded.