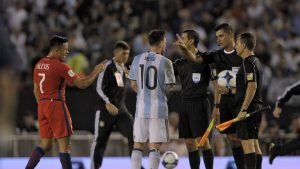 Barcelona star Lionel Messi was suspended for four Argentina matches by FIFA on Tuesday for swearing at an assistant referee.

Messi was found guilty of “having directed insulting words at an assistant referee” in the World Cup qualifier against Chile last Thursday which Argentina won 1-0 thanks to a penalty from the Barcelona hitman.

Messi will miss Argentina’s next South American qualifying game against Bolivia, scheduled for later Tuesday, with the remainder of the suspension served over his country’s subsequent World Cup qualifiers.