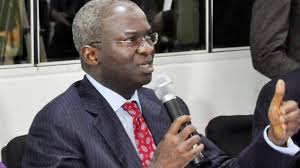 The Minister of Works, Power and Housing, Mr Babatunde Fashola, while paying a courtesy visit on Gov. Akinwunmi Ambode of Lagos State in Ikeja, said the federal government was ready to support states to generate `captive power’ as a permanent solution to the problem of electricity in the country, The Guardian reports.

He said the federal government was making efforts to expand the capacity of the transmission stations in Ayobo and Odogunyan and Ikorodu, while that of Alagbon in Ikoyi had been completed. The minister assured the governor that Lagos State would get the bulk of the incremental power from the Omotosho power plant in Ondo State and Olorunsogo power plant in Ogun.

He said that the federal government was ready to assist Lagos and other states in generating captive power, particularly in rural areas. “We want all states to get involved, and wherever it is possible, to use captive power, especially in the rural areas. We will be happy to give our support, but we want all of these to happen in a regulated environment where the left hand knows what the right hand is doing,’’ Fashola said.