The fund, kept by the Central Bank of Nigeria, is to enhance evacuation of power by the Transmission Company of Nigeria to the various power distribution companies in the country without wastage. 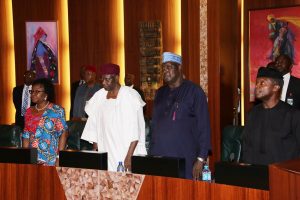 The Minister of Power, Works and Housing, Babatunde Fashola, briefed State House correspondents on the approval after the FEC meeting presided over by the Acting President, Professor Yemi Osibabjo.

He said the guarantee is an instrument meant to resolve liquidity problems encountered by the power generating companies in payments to gas suppliers.

Also approved by FEC was the sum of 263 million Naira for the growing of gum arabic seedlings in the country.

The Minister of Agriculture, Audu Ogbeh, said the fund was approved to strengthen the capacity of Nigeria in producing the gum, as the country ranks second in the world behind Sudan.

He said $43 million was earned from the export of gum arabic in 2016, and that 17 states are involved in the gum’s cultivation across Nigeria.

Mr Ogbeh added that the FEC also approved the distribution of improved cassava stems to farmers in the southern part of the country.

The cassava stems, to be provided by the International Institute of Tropical Agriculture, are to improve Nigeria’s cultivation of cassava which is a primary source of ethanol and industrial starch production.