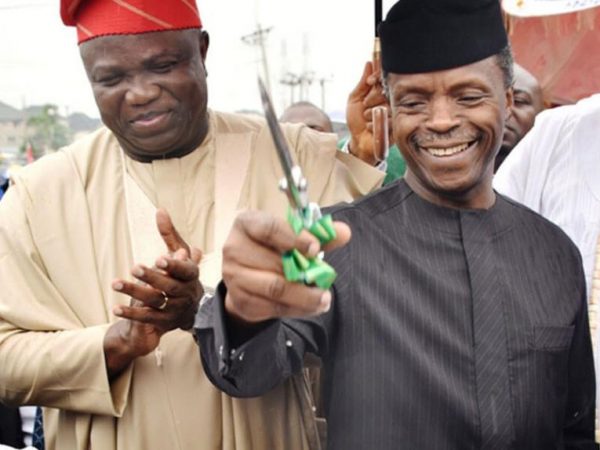 The acting President, Yemi Osinbajo, on Tuesday said the federal government and the People’s Republic of China would round off negotiations on the Lagos-Calabar rail project estimated at $11.117 billion in June.

Osinbajo also disclosed that the federal government had already provided its portion for funding the rail project and promised that the negation would be concluded in the next three months.

He said this at the unveiling of Lagos-Ibadan rail project at the Nigerian Railway Corporation compound, Ebute-Metta, Tuesday, noting that the national rail project would create 500,000 jobs.

On behalf of the federal government, President Muhammadu Buhari had in June 2016 signed an agreement with the China Civil Engineering Construction Company (CCECC) for the construction of the Lagos-Calabar coastal railway line at $11.117 billion.

Under the agreement, the federal government was able to negotiate the price of the contract downwards by $800 million, stressing that although the contract was initially valued at $11.917 billion, it would now to cost $11.117 billion.

At the unveiling, the acting president disclosed that the federal government “has already provided our portion for funding for the Lagos-Calabar route as well. We expect that negotiations with the foreign component of the funding will be finalised within the next three months”.

He, therefore, assured Nigerians that a vibrant railway system “will confer many benefits on the society. Our ultimate goal is to restore a railway using culture for both commercial and personal transportation. We are confident that the national rail project will create up to 500,000 jobs. Aside, it will facilitate the movement of up to 3.2 million tonnes of cargo per annum.”

He explained that the ground breaking “reflects the federal government’s to build a globally competitive economy with first grade infrastructure. Railway, in our strategy, is underscored by our economic recovery and growth plan as well as incorporated 2016 and 2017 budgets”.

“We made provision for matching funds in 2016 budget to complement the concession loans obtained from the People Republic of China. The Chinese Government and Chinese Exim Bank have always proved to be a reliable partner to the Nigeria Government. We have the entire Lagos Kano rail track as well as the Lagos Calabar railway track in the 2017 budget, he added.”

Osinbajo disclosed that negotiation on the Kaduna –Kano portion of the track would soon be completed, noting that when completed the rail projects “will reduce the burden on national high ways. It will also reduce deterioration of the road network and increasing the life span of our roads”.

He explained that railway network would support efforts “to diversify the economy and enhance our export potentials. Several of our cities will become known as railway towns will boost economic activities within the railway lines that will eventually cut across the entire country”.

He, therefore, said the new approach to rail project development explained why the federal government “supports the replacement of the 1964 railway acts with a legal frame work that open railway projects in the country to greater private sector participation.

“We expect to ensure that the resources to manage efficient modern and reliable train services. We will see the same zeal in the project construction so that the railway lines we be completed on schedule. We are looking forward to a fast and efficient service between Lagos and Ibadan within the projected time frame which is on or before December 2018”.

Also speaking, Ambode commended the federal government for approving the right of way for the proposed Lagos Light Rail (Red Line) project, thereby asking the Nigeria Railway Corporation “to cooperate with the state government during the construction of the red line”.

He said the proposed extension of the Lagos-Ibadan Rail Project would go a long way to open up the economy of the South-west as well as facilitate regional integration and growth.

He said the project also marked a new dawn in the transformation of the nation’s transport infrastructure, especially for the South-west, thereby expressing delight that the take-off had become a reality.

Ambode added that aside boosting regional integration, the agricultural sector would receive the long awaited boost as the rail line “will be a fast and convenient means of transporting farm produce from the hinterland to the city thereby increasing the economies of the states”.

“A direct benefit of this project is that containers and goods from the Apapa Port will now be transported by rail thereby reducing the number of trailers and other heavy duty vehicles on our roads.

“A direct consequence of this project would be less productive man hours wasted on the roads due to gridlock and bad roads due to heavy duty vehicles. In addition, we expect government to expend fewer resources on road repair and maintenance once the rail line takes off and reduce the pressure of articulated vehicles on our roads,” the governor said.