Home National News FG warns Goodluck Jonathan to stop blaming others for the kidnap of...
Facebook
Twitter
WhatsApp
The minister of Information, Alh. Lai Mohammed has told former President Goodluck Jonathan to stop pointing fingers to everyone as it concerns the kidnapping of  the Chibok girls who were abducted under his tenure as the President of the country.
The advice was con­tained in a statement issued in Abuja on Monday by the Minis­ter of Information and Culture, Alh Lai Mo­hammed, following the former President’s reaction to the report by a British newspaper that the British armed forces’ offer to attempt to rescue the girls were rebuffed by then Presi­dent Jonathan.
Mr. Mohammed said, ‘’While former President Jonathan reserves the right to defend his admin­istration, he should not engage in finger-pointing by saying, in a statement, that ‘some people who have obvi­ously been playing politics with the issue of the Chibok girls will stop at nothing to fur­ther their interest.” 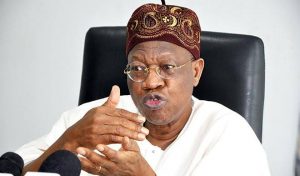 He also said,  ‘’After the girls were kidnapped and the Jonathan Administra­tion did nothing for all of 15 days or make any determined ef­forts to rescue them thereafter, our party, the then opposition APC, told the nation several times that the whole Boko Haram crisis was allowed to escalate by the PDP-controlled Federal Government so they can use it as a political tool ahead of the 2015 elections.”