The cruelty of the Fulani herdsmen has continued as a 50-year-old staff of the Delta State University, DELSU, Abraka, Mr. Sunday Idama, at his cassava farmland in Ovre-Abraka community, Ethiope East Local Government Area, Delta State was murdered by a suspected Fulani herdsmen.

Mr. Idama, a father of 14 children, married to three wives had gone to his farm, last Friday, to mount surveillance after discovering that herdsmen were allegedly constantly uprooting his cassava and feeding their cows with them. It was gathered that Idama, who went to the farm with his motorcycle encountered the herdsmen same night and challenged them.

They pounced on him with machetes, cutting him on the hand, leg, face and everywhere until he gave up the ghost.

The Police in the state have confirmed the  killing, according to the Delta State Police Public Relations Officer, PPRO, DSP Andrew Aniamaka, confirmed the killing of Idama.

He said that the police evacuated the remains to Ufuoma Clinic in the area for autopsy and investigations were on by homicide detectives to unmask the killers, no matter their status. 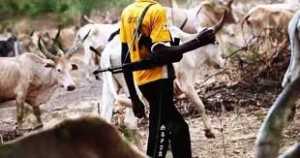