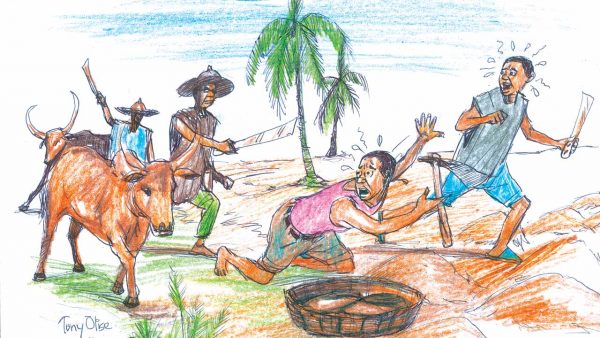 One person was re­ported killed and crops worth mil­lions of Naira destroyed as herdsmen clashed with farmers in Umuobasiuk­wu, Ozuitem community in Bende Local Govern­ment Area of Abia State.

The Commissioner of Police, Mr. Leye Oyebade, who confirmed the vio­lence at a press briefing on Monday evening in Umuahia, said that the incident occurred on Sunday.

Oyebade was flanked at the event by the Chair­man of Hausa/Fulani community in Abia, Alh­aji Danladi Yaro; Deputy Speaker of the Abia State House of Assembly, Hon. Cosmos Ndukwe; former Chairman of Abia Coun­cil of Traditional Rulers and the Traditional Ruler of Umuobasiukwu com­munity, HRM Eze John Akarilo; the Chairman of Miyetti-Allah in the state, Hassan Buba; and the Special Adviser to the Governor on Security, Captain Agwu Awa (rtd).

The CP said that the sit­uation had been brought under control as mobile policemen had been de­ployed in the community to protect life and prop­erty and prevent the esca­lation of the fracas.

Oyebade said that he had visited the commu­nity to ascertain the level of damages and appealed to both parties to sheathe their sword.

He further said that a committee compris­ing representatives of the herdsmen, Hausa/ Fulani community, the local community, the state government, secu­rity agencies and other stakeholders had been constituted to resolve the face-off.

The police boss said that the peace commit­tee would also fashion out ways to bring about a permanent solution to the frequent clashes between herdsmen and their host communities in the area.

Corroborating the CP’s account, the Chairman of Miyettii-Allah in the state, Hassan Bub,a ap­pealed to herdsmen to embrace peace and live in harmony with their host communities.