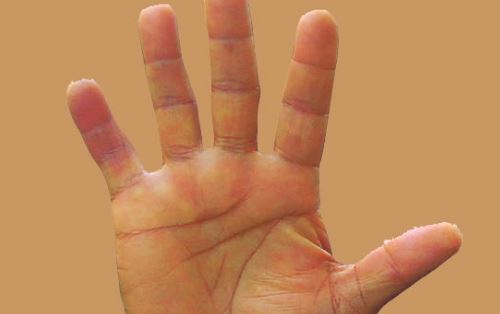 The human palms may never cease to amaze, especially because of the lines that crisscross them.

Evolutionary biologists say the lines in the palms of our hands are formed in the womb around 12 weeks of pregnancy, and are present on a baby’s hands when born.

However, many people believe that an individual’s life history—from birth to whenever—can be revealed when the palm is read by a palmist.

There is no science that supports the claim though.

Scientifically speaking, experts say, the lines on a palm, otherwise known as palmar flexion creases, help the hand’s skin to stretch and squeeze.

The lines — or, if you will — creases in our hands, enables us to flex our hands easily, with the creases folding in, allowing us to be more dexterous and both hold and grab on to objects.

When you clench your hand, palm lines provide an avenue for the hand’s skin to fold without bunching up and making it difficult to grab onto items.

That may also be why there are strong creases where the bones in the fingers and thumb meet, scientists say.

The thickness and number of creases on your palms also depend on factors such as family history and race.

Most people are born with three main creases on their palm, although the thickness, frequency and prominence depends on our genes.

There are rare cases when a person is born with just the one dominant crease running along the top of their palm, rather than three.

This affects one in 30 people is called a “singular palmar increase.”

While, normally, it isn’t symptomatic of any health conditions, it sometimes is indicative of Down’s syndrome, foetal alcohol syndrome, Turner syndrome, Aarskog syndrome and Rubella syndrome.

A doctor, however, takes several other factors into account before making a diagnosis.