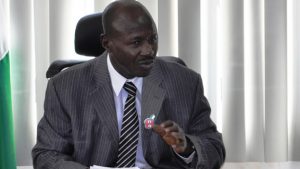 Ibrahim Magu has been rejected by the Senate for confirmation as the  Chairman of the Economic and Financial Crimes Commission (EFCC) .

Mr Magu was rejected after the Senators voted against his confirmation.

The Senator representing Kogi west Dino Melaye, had cited a fresh security report from the Department of State Services (DSS).

In December 2016, The Nigerian Senate refused to grant confirmation to the nomination of Ibrahim Magu as Chairman of the Economic and Financial Crimes Commission (EFCC).

Explaining the reason behind the decision, the Senate said that security report available to it showed that Mr Magu is not fit to be chairman of the body.

In this regard, the lawmakers sent back his nomination letter to President Muhammadu Buhari.

Addressing journalists at the National Assembly, Senate Spokesman, Aliyu Abdullahi said that based on security reports, the Senate cannot proceed to confirm the acting EFCC Chairman.

With the Senate throwing back the nomination of the Mr Magu back to President Buhari, it is not clear at this point what the President’s action would be.