After Dr Allwell Oji jumped into the Lagoon at Third Mainland bridge, and also the sucidal attempt by two women also wanting to jump into the Lagoon.

Many people, including medical experts, seem to be pointing to depression as the possible cause for Dr Allwell Oji’s tragic suicide. However, two renowned Ifa priests have maintained a different stance.

They believe that the likely cause of Dr Allwell Oji’s decision to commit suicide was either because he was controlled using an African traditional technique or the lagoon is hungry and angry.

In an attempt to solve the mystery of what really caused Dr Oji’s demise, NewTelegraphonline consulted Ifa priests, Chief Omo-Oba Olorunwa Ayekonilogbon and Chief Yemi Elebuibon, another well-known Ifa priest. And they said:

“Considering that it was after Oji received the call that he took his life in such a cruel manner, speaks volume. That a bird cried at night and a child died in the morning could not be wished away as a mere coincidence.

“It is either he was controlled using an African traditional technique or the lagoon is hungry and angry.

If he was controlled through African traditional way, no matter how he tried to evade it, he could still have looked for or waited to get near water before taking his life. You also know that our religion believes in destiny, it could have been his destiny as welAgain, if you look at the rate of deaths in the lagoon in recent time, via suicide mostly, it is equally possible the water is hungry and angry.

What His Royal Highness, Oba Rilwan Akiolu of Lagos, needs to do now and urgently too, is to assemble credible traditionalists, I mean Ifa priests, to find out why the lagoon has suddenly become angry. All what the Babalawos need do is get close to the water, take a little for consultation. Ifa is capable and would surely reveal why all these things are happening.

Until that is done, we might be chasing shadows.”

Chief Yemi Elebuibon spoke in a manner that suggests that Oji could have been ‘programmed’ (hypnotized) to do what he did:

“It is a great offence for a person to commit suicide; an abomination. Whoever does that is considered to have brought dishonor to his/her family.

“Yet, the traditional belief behind suicide is that some people do not just commit the act on their own, but for some mystical interventions.

However, some people could find themselves in critical and unpleasant situations, and opt for suicide as the last resort instead of living to face the problem.

Whenever it happens proper inquiry is set up by the king or head of the community where it occurred to find the cause of the problem and an Ifa priest is mostly called upon to prescribe atonement to cleanse the city.” 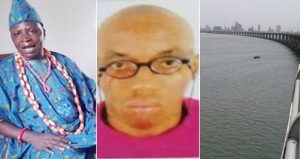