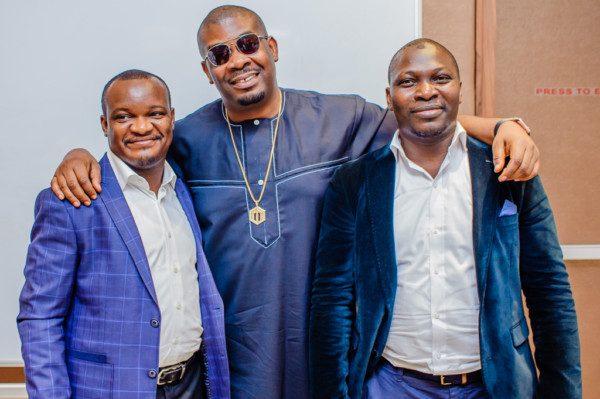 Mavin Records boss, Don Jazzy has launched a free Wi-Fi service called Flobyt, to give back to the society. Don Jazzy is partnering with founder of Tsaboin, technology company, Dele Odufuye, to make the dream come true.

At unveiling of the initiative which was held at Renaissance Hotel, in Lagos, the Marvin Records boss said, investing in Flobyt has been a life-long dream of his.

Our Wi-Fi is the fastest in town and those who stream our music and content as entertainers are from the US and the UK. We believe that if we improve our services the numbers can improve.” “I believe so much in this. This is one of the few other investments we are going to be sharing with you. I have been on social media for a long time. I know how expensive data is. I give free airtime, now it’s time to give free WiFi,” he said.

Don Jazzy, however, revealed that at specified locations, between 10-30 people can be connected to Flobyt at the same time while in locations with higher traffic, Flobyt Max can provide internet service to 10 – 80 concurrent users.

According to the CEO of Tsaboin, “Flobyt is an easy-to-use WiFi service which has been installed across several locations in Lagos. Some of these locations include eateries, parks, taxis, buses, restaurants, and cafés, Dele Odufuye, Tsaboin MD/CEO, revealed during the launch in Ikeja, Lagos.” The service, he said, was designed to replicate the home WiFi experience when people are out and about.