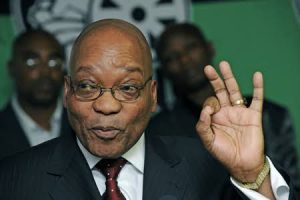 on Wednesday was transformed into a rally against President Jacob Zuma, who had been barred from the event.

The family of the African National Congress stalwart, one of Nelson Mandela’s closest colleagues in the struggle against white minority rule who died on Tuesday aged 87, had asked Zuma to stay away.

It was however attended by vice president Cyril Ramaphosa, cabinet ministers and all of the country’s living post-apartheid former presidents.

South Africa was thrown into political turmoil on Monday when Zuma ordered the respected Finance Minister Pravin Gordhan to return early from an overseas investor trip, fuelling speculation that he was preparing to replace him with a loyalist.

The move sent the rand tanking and renewed investor fears that the country could be about to enter a period of economic and political uncertainty.

In a fiery eulogy, former president Kgalema Motlanthe said Kathrada was “deeply disturbed by the current post-apartheid failure of politics”.

“He found current leadership wanting on many fronts… and would not hesitate to call for the resignation of the president of the country with whom the buck stops,” said Motlanthe.

After his retirement from politics in 1999, Kathrada kept a low profile, but in recent years had spoken out against corruption and failings in the ruling ANC.

He openly criticised the current government of Zuma, which has been accused of corruption, mismanagement and of failing to transform the lives of black South Africans.

Quoting from a letter Kathrada wrote to Zuma a year ago calling for him to stand down, Motlanthe received long and thunderous applause from mourners — including serving ministers.

“In the face of such persistently widespread criticism… is it asking too much to express the hope that you will choose the correct way that is gaining momentum‚ to consider stepping down?” Kathrada wrote in 2016.

Motlanthe said that “354 days ago today comrade Kathy wrote this letter to which a reply has not been forthcoming”.

An unidentified mourner shouted out “down with Zuma” in Zulu with other mourners responding “down”.

“On a day like this we should not mince words, we should say it like it is,” said Motlanthe.

Zuma’s office said in a statement issued ahead of the service that he would “not attend the funeral and memorial service in compliance with the wishes of the family”.

Neeshan Balton, the executive director of the Ahmed Kathrada Foundation, told Gordhan, who joined mourners for the funeral, that “irrespective of whether you are a minister or not in days or weeks to come — you remain true to the values and principles that Ahmed Kathrada would be proud of”.

Gordhan told local media after the service that Kathrada’s letter to Zuma was a “message to all of us that we have the responsibility to steer this country in the right way, not just for our own pockets and for ourselves but for the benefit of millions of south Africans”.

Kathrada was among those tried and jailed alongside Mandela in the 1964 Rivonia trial, which drew worldwide attention to the brutalities of the apartheid regime.

He died in hospital in Johannesburg after a short illness following brain surgery.