Home National News I know nothing about the launch of US Radio Biafra – Nnamdi...
Facebook
Twitter
WhatsApp 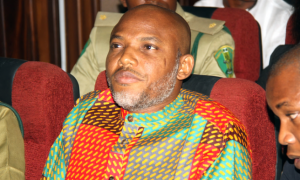 Nnamdi Kanu,the leader of Indigenous People of Biafra, IPOB  has distanced himself and his deputy, Uche Mefor, from a live broadcast of Radio Biafra slated for today in the U.S.

According to the group leader who spoke through his lawyer, Ifeanyi Ejiofor, in a telephone conversation on Sunday said he was aware but did not give permission for the launch.

Radio Biafra was slated to go on air live in the U.S. on Sunday. This was disclosed by Leonard Anemene, a leader of the organisation, in a statement issued on Friday.

Mr. Anemene noted that if not for some challenges, the project would have been out earlier.

He however, failed to disclose the exact location where the station will be operating from.

“Radio Biafra has approval and authorization to set up in America according to the U.S. laws,” Mr. Kanu said on Sunday. “But neither me nor my deputy, Uche Mefor, gave approval for it to go on air today in America.”

Mr. Kanu is currently being tried by the federal government for treason based on his formation of IPOB, establishment of Radio Biafra, and his call for a sovereign Biafran state. 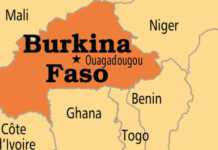