The Minister of Sports and Youth Development, Barrister Solomon Dalung has promised to give the football loving fans in Lagos a feel of the seeing their darling Super Eagles play in the center of excellence. According to the minister, the Russia 2018 FIFA World Cup qualifier between Nigeria and Zambia will be played in Lagos  but that will be dependent on if the Lagos State government can complete the renovation of the national stadium within six months.

Dalung said after his visitation to inspect the national stadium, “As a way of motivating the Lagos state government, the Super Eagles match against Zambia can be played in Lagos if the renovation of the stadium can be completed in six months.”

This received a loud ovation from the crowd which had gathered to listen to both the minister and his host, Governor Ambode. The President of the Nigeria Football Federation, Amaju Pinnick was also present at the venue.

Nigeria plays Zambia in October in the return leg of the 2018 World Cup qualifier Before then, the Eagles are expected to play the Indomitable Lions of Cameroon on August 27 in Uyo and September 2 in Limbe Cameroon. The Super Eagles last match in the qualifiers will be against the Desert Foxes of Algeria which comes up on November 5, in Algiers. 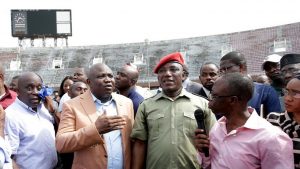