Nnamdi Kanu,Leader of the Indigenous People of Biafra 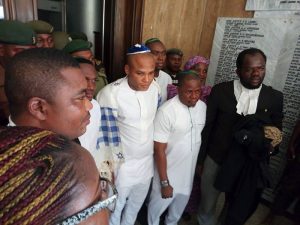 along with three other persons has filed fresh bail application before a Federal High Court in Abuja.

Operatives of the Department of State Service prevented most journalists from covering the Monday’s proceedings fueling an already raging speculation that the prosecution preferred to try the defendants in secret.

The accused persons charged along with Kanu were the National Coordinator of IPOB, Mr. Chidiebere Onwudiwe; an IPOB member, Benjamin Madubugwu, and a former Field Maintenance Engineer seconded to the MTN, David Nwawuisi.

Apart from Onwudiwe, who was recently added to the list of the defendants in the amended charges, the others had been separately denied bail by the current trial judge, Justice Binta Nyako, and the former one, Justice John Tsoho, who withdrew from the trial following allegation of bias leveled against him (Tsoho) by Kanu.

All the defendants are on remand in Kuje prison in Abuja.

But the defendants filed fresh bail application, following the ruling by Justice Binta Nyako, on March 1, 2017, quashing six out of the 11 counts instituted against them by the Federal Government.

Kanu’s lawyer, Mr. Ifeanyi Ejiofor, on Monday urged the court to grant bail to the IPOB leader on health grounds.