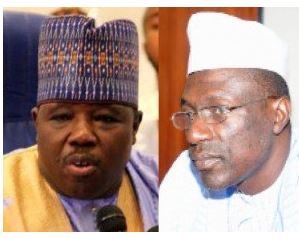 The leadership crisis in the Peoples Democratic Party (PDP) intensified yesterday as leaders of two camps within the party, Senator Ali Modu Sheriff and Senator Ahmed Makarfi traded allegations over inducements from both within and outside the party.

It was Sheriff who cast the first stone when he alleged that the Makarfi-led national caretaker committee had rejected the much sought after political solution because of the N50 million subvention they enjoy from the governors of the party.

Speaking through his deputy national chairman, Dr Cairo Ojougboh, Sheriff also alleged that Makarfi’s presidential ambition was also a reason why members of the national caretaker committee have refused to align with the political solution initiated by former President Goodluck Jonathan.

Addressing journalists at the party’s national headquarters in Abuja yesterday, Ojougboh described the Prof Jerry Gana-led strategy and inter-party committee as illegal, even as he lambasted Makarfi over a recent statement on the affairs of the party.

The deputy national chairman said, “The reason why the caretaker committee is protesting is that they have seen that the table is now crumbling fast under their feet. All the organs of the party are keying into the reconciliation and when the reconciliation pulls through, they are out and Senator Makarfi can only come as member of the BoT and so the N50 million monthly Subvention from governors will stop. They get subvention from the governors every month and when reconciliation happens, that subvention will stop.

“Secondly, Makarfi wants a situation where he will tailor-make and tailor-made the convention to suit his interest because he has come out to say that he will be contesting the presidency of the country.

“We are very mindful that we are not going to tie our party around any individual. That is why the national chairman, Sheriff said look, ‘I am going to throw everything open’. That is why we are studying the position of the reconciliation committee and that is good enough to advance our party”.

But in a swift response to Sheriff’s claims, the Makarfi-led PDP accused the National Working Committee (NWC) led by Sheriff of receiving jeeps from some governors, ministers and officials of the All Progressives Congress (APC).

Alleging that Sheriff was evading Supreme Court service, the Makarfi-led caretaker committee further accused the national chairman of reneging on the conditions of political solution for both leaders to resign their positions.

Spokesman of the Makarfi camp, Prince Dayo Adeyeye, denied the alleged N50 million monthly subvention from governors, saying it was “a lie from the pit of hell and a very cheap and unintelligent attempt at blackmail.

“It is a known fact by all critical stakeholders of the party and even the staff that the national caretaker committee has from inception been hamstrung by inadequate finance, so much so that simple secretariat duties have been a struggle, while we have been unable to pay staff salaries of just N18 million a month. Members of the national caretaker committee do not enjoy any remuneration. It is a selfless service”, he added.

He said, “Nevertheless, no matter how little, it is better to be funded by our party members than by the All Progressives Congress (APC) as is the case with Senator Sheriff and his cohorts. Dr. Cairo should tell us which APC governor, minister or official bought Jeeps for them? Governor Fayose has also made a public allegation that Senator Sheriff has received the sum of $1 million from the APC to organize a new convention. Senator Sheriff is yet to publicly refute the allegation.

“We accepted President Goodluck Jonathan and the governor’s comprehensive political solution. It calls for the resignation of Senator Sheriff and the so called NWC and also the National Caretaker Committee to create a level playing field for all, and to build trust among all members. The agreement is then to be submitted to the Supreme Court as the judgment of the Court. These would have provided both political and legal solution to the logjam. But Senator Sheriff rejected it, and continues to insist that he would conduct a National Convention when he does not enjoy the trust and confidence of the vast majority of party members. It is therefore very clear who has a personal or hidden agenda, and I dare say, it is Senator Sheriff and not the National Caretaker Committee. The blackmail of Dr. Cairo is too cheap and too simplistic.

“We want to ask why Senator Sheriff is running away from justice by avoiding service from the Supreme Court. This is very unfair from a man who has been using the court to further his own selfish ends. He should accept service and face his case squarely, if he believes in the merit of his cause”.