Operatives of the Lagos State Taskforce on Environment, at the weekend arrested 43 suspected oil bunkers and sealed-off property in which 2.5 million litres worth of adulterated diesel were recovered at Alausa, Ikeja area of the state. 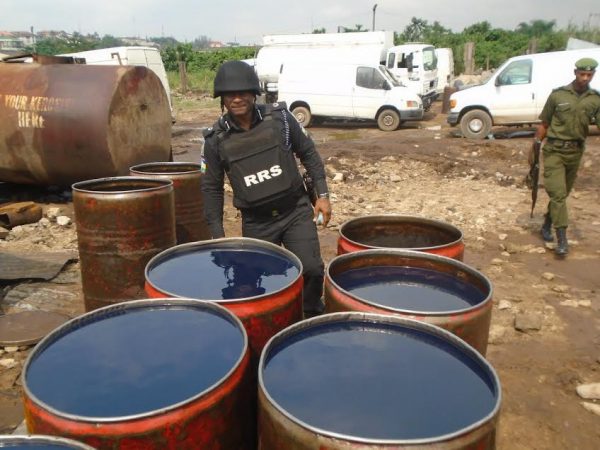 One of the suspects, Mr. Iyiola Adeyinka, aged 40 years, from Ilero in Oyo State, confirmed that the company where the recovery was made, Jlobjin Petroleum Ltd, belonged to one Alhaji Lukumon Ojena.

He confessed that they used to mix diesel with kerosene on daily basis to be  supplied in large quantities to the public particularly communication companies and banks at cheaper rates across the state.

Mr.  Adeyinka, who stated that they used to make sales of over N20 million everyday from adulterated diesel, said government should help him as he was the only son of his family.

Another arrested worker of the company, Mr. Nonso Mordi, aged 25 years from Ogwashi Uku in Delta State, confessed; “Our business is very lucrative as individuals get between N3,000 to N4,000 per day.

“We have a very good contact with major oil marketers who supply us with diesel and kerosene everyday for our business,” he stated.

Chairman of the Lagos State Taskforce, SP Olayinka Egbeyemi, who led the recovery team said the operation was sequel to “Save Our Soul,” SOS, petitions submitted to his office over illegal activities of some oil bunkers at Plot 8, Elephant Cement Way, Secretariat, Alausa, Ikeja.

Egbeyemi added that during the exercise, suspects were caught in the act, adulterating original diesel with kerosene and selling at a reduced price to the public.

According to him, “Preliminary investigation with available documents (receipts) revealed that the illegal business has been on for over seven years.

Meantime, following the directive the Lagos State Commissioner of Police Mr. Fatai Owoseni, the taskforce boss said all those arrested in connections with the nefarious act would be charged to court as soon as possible.

It was gathered that the mechanics around the area complained that activities of the illegal oil bunkers was responsible for a fire outbreak that destroyed properties including 18 vehicles around the area recently.

Mr. Anjorin Babalola a mechanic said that they were afraid to make a report to government because they were being threatened by the vicious notorious oil bunkers.