It was the end of the road for a guest at a wedding after he was shot dead at the venue of a wedding party in Lagos, Victory Event Centre, Agege.

According to eye witness reports, it was gathered that the victim, who had yet to be identified, was eating when he was hit by a stray bullet.

It was gathered that an aide of the Chairman of the National Union of Road Transport Workers, Lagos State, Mr. Tajudeen Agbede, fired the shot that produced the stray bullet.

It was gathered that Agbede and some top officials of the NURTW had attended the wedding ceremony.

As Agbede was leaving the event around 6pm, some hoodlums were said to have waylaid him for money,one of his   aides shot into the air three times.

The last bullet reportedly hit the victim where he was eating and he fell. 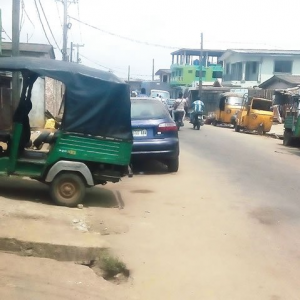 A witness, who did not want to be identified, said within five minutes, the wedding abruptly ended as everyone fled the scene.

He said, “The bride is the younger sister of the personal assistant of Agbede and that informed the presence of top NURTW officials.

“Everything went on well until Agbede was about leaving around 6pm. There was a scuffle at the venue as some hoodlums asked for money from him. The man was still in their midst when they started fighting one another.

“One of Agbede’s aides fired twice to make way for his principal. As he was about putting the gun in his pocket, he released another shot, which hit the man.

“The man that fired the gun is huge and dark in complexion. He joined Agbede’s convoy and fled.”

A female resident, who lamented the incident, said the victim’s corpse was abandoned as everyone took to their heels.

She explained that no one could identify the deceased as he lay in a pool of blood.

“He was eating outside the hall when he was hit. The bullet hit him near the left eye and came out from the other side of his skull.He died immediately.

“There was confusion on this street yesterday (Sunday). After some minutes, people started coming to see if they knew him. Nobody could identify him. He was a fine-looking gentleman,” she said.

Our correspondent learnt that some hours later, policemen from the Elere division removed the corpse and deposited it in a mortuary.

Another guest at the party told reporters that the suspect was well known to the NURTW hierarchy.

When contacted, Agbede confirmed being at the venue of the wedding, but said he was not aware that anybody was killed.

He said, “I was at the wedding, but I later left without any incident. We had left the party when the incident happened.”

Badmos said report from the Elere division indicated that the victim was killed by some gunmen.

She said, “I confirm the murder case. At about 7.10pm, we got a report that around 6.10pm, a man of about 21 years old, whose name and address had yet to be ascertained, was shot dead while eating  outside Victory Event Centre, where a wedding was taking place.

“We were informed that he was killed by two hoodlums, who immediately escaped. The AIG has directed the command to investigate the murder case and arrest the culprits.”