Home National News MASSOB shuts down camps in Igboland till further notice
Facebook
Twitter
WhatsApp
The leadership of the Movement for the Actualization of the Sovereign State of Biafra, MASSOB, led by Uchenna Madu, yesterday, announced that it has closed down all the camps of ,MASSOB, in Igboland including it headquarters 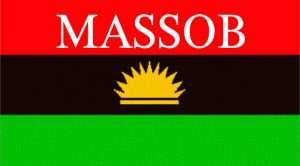 in Okwe, Onuimo Local Government Area of Imo state. MASSOB made this known through a release issued to newsmen in Owerri, by the National Director of Information, Comrade Samuel Edeson. The release stated that the decision was unanimously taken after a meeting comprising the National officers, at the state, zonal and local government coordinators.
The reasons given for the sudden closure of the MASSOB camps were captured in the release. “That MASSOB closes all camps including headquarters because some disgruntled persons in the name of MASSOB perpetrate all forms of criminalities and social vices. “That we refuse to allow the platform of reformed MASSOB under the leadership of Comrade Uchenna Madu to be used for breeding anti social vices that can cause breakdown of law and public disturbances.
“That MASSOB being a non violence organization that has redeemed her lost public trust/ confidence as a result of Uwazuruike’s deviation and dubious acts will never allow drug peddling and criminal acts flourish in our establishments or associated our existence with anti social vices.
“That in the spirit of Igbo cultural values, MASSOB wishes to inform Ndigbo and Biafrans in general that no descent organization with the peoples mandate flourish in atmosphere of criminalities, drug peddling, lost focus and sabotage.
“That in the spirit of Biafran brotherhood, MASSOB has considered forgiving the leader of BIM, Ralph Uwazuruike (former MASSOB leader) who ran away from Okwe on March 15, 2014 and his subsequent expulsion on 30th Nov, 2015 to return to his family house, Okwe which incidentally houses MASSOB headquarters.
“That we considered Uwazuruike’s three years exile from his father’s compound as enough punishment for his stupidity. “That MASSOB has handed over Uwazuruike’s atrocities against the people of Biafrans into the hands of Chukwu Okike Abiama and Igbo ancestors.
“That MASSOB under the leadership of our leader, Comrade Uchenna Madu will continue to operate non violently from our new descent office (no more camps) with respect and regards to other genuine pro Biafra groups. “That we know that many people will not be happy that MASSOB is closing Okwe headquarters. It is part of our internal reorganisation for strategic growth and positive functions.

“That MASSOB wishes to inform Imo state government, security agents and Okwe host community that starting from 5th day of March, 2017, MASSOB ceased to operate in Okwe and any group of persons or individual camped or reside or found within the family compound of Uwazuruike’s or inside the former MASSOB Freedom House, Okwe is not a MASSOB member but criminals.”