According to the coach of Lyon, Bruno Genesio, “He’s making good progress and is proving that we did well to recruit him,” after Lyon stumped up an initial fee of 16 million euros ($17 million) to prise him away from Old Trafford.

Ahead of Friday’s trip to Bordeaux in Ligue 1, the 23-year-old appears equally as happy with his new team-mates and surroundings but knows there is plenty more to come.

Depay said, “Even if I scored twice against Metz, I think there are things I could have done better but I’m progressing. It’s just the second time I played 90 minutes. I’m not at my best level.’

The Dutchman represented Lyon’s lone acquisition in the J 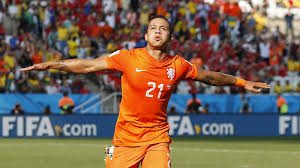 While still holed up in a hotel, Genesio praised the way Depay has blended into the squad and lauded his attitude off the pitch, with the winger also starting to come to grasps with the language.

“He’s not shy, he’s someone who approaches the others. This makes things easier in terms of human relations. We’re noticing his progress over the past few matches even if there are still things to improve. We haven’t seen his true self yet,” said Genesio.

Goalkeeper Anthony Lopes hailed Depay’s impact in the short time he’s spent at his new club, marvelling at his contribution for someone who featured sparingly under Jose Mourinho at United.