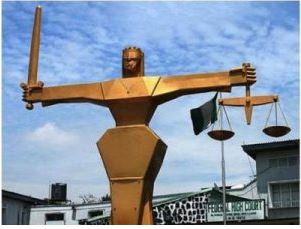 Justice Mohammed Idris of the Federal High Court in Lagos will today rule on whether or not to allow a prosecution witness, Onovah Ovenevoh testify against former Governor of Abia State, Dr. Orji Uzor Kalu without the Economic and Financial Crimes Commission (EFCC) serving his extrajudicial statement on the defence team.

Justice Idris adjourned the case after counsel to the former Governor, Mike Ozekhome (SAN) and that of his co-accused, Chief Solo Akuma (SAN) objected to the testimony of Ovenevoh on the ground that his statement was not part of the proof of evidence given to him by the prosecution.

Kalu, and a former Commissioner for Finance in the state, Udeh Jones Udeogu and Slok Nigeria Limited were arraigned before Justice Mohammed Idris on a 34 count charge of conspiracy, Fraud and money laundering.

They pleaded not guilty to the charge.

At the resumed hearing of the matter on Monday, the EFCC witness was about to begin his testimony when lawyer to the 2nd and 3rd defendants, Akuma drew the court’s attention to the fact that his extrajudicial statement was not served on him by the commission.

Akuma insisted that service of witness statement on the defence is a constitutional right and a facility that should be provided for an accused person as enshrined in Section 36(6)(b) of the Constitution.

The lawyer said, “Where a witness is listed in the proof of evidence and his statement is not front loaded, such a witness should not be allowed to testify.

“Section 379(1) of the Administration of Criminal Justice Act (ACJA) listed the contents of proof of evidence to be the summary of the statements of the witnesses to be called by the prosecution.

“The witness is not a court’s witness but that of the prosecution and as such his statement should be made available to us,” he said.