The NBA just saw 3 games last night but it was also a night were history was made for Dallas Mavericks star man as Dirk Nowitzki became the sixth player in NBA history to reach 30 000 career points while OKC’s Russell Westbrook scored 58 points to tie the franchise record for the most points in a game.

Despite a fantastic performance by  OKC’s hit man Russell Westbrook, OKC were still  defeated 126-121 by the Portland Trail Blazers. Allen Crabbe had 23 points and four rebounds, Damian Lillard had 22 points and eight assists, and CJ McCollum finished with 21 points.

OKC were led by Westbrook with 58 points and nine assists, Nigerian-American guard Victor Oladipo had 16 points and five rebounds, while Enes Kanter ended the game with 11 points and seven rebounds.

It was a good night for Dirk Nowitzki as he helped The Dallas Mavericks beat the Los Angeles Lakers 122-111 with 25-point, 11-rebound double-doubles, Seth Curry had 18 points and five assists, and Yogi Ferrell had 16 points and seven assists.

The Washington Wizards stunned the Suns 131-127 in Phoenix. Bojan Bogdanovic had 29 points and nine rebounds, Bradley Beal had 27 points and John Wall ended the game with a 25-point, 14-assist double-double.

The Suns were led by Eric Bledsoe with 30 points and five assists, Devin Booker had 25 points, four rebounds and six assists, and TJ Warren and Alan Williams both finished with 15-point, 10-rebound double-doubles. 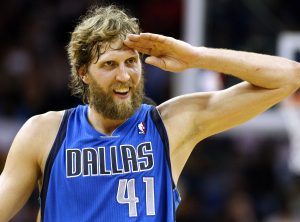