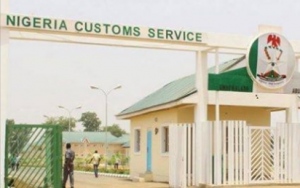 of those alleged to have smuggled about eleven vehicles –ten Hilux and one Land cruiser jeep into the country.

The Public Relations Officer, NCS, Mr. Joseph Attah, said the vehicles were seized based on credible intelligence provided to operatives of the NCS Compliance Team, that some smuggled vehicles have been moved from Maigatari, Jigawa State to a house at Magaji Rumfa, Kano.

There had been reports that the vehicles were smuggled into the country by a senator from Kano State.

But Attah in a statement said the claim had yet to be confirmed as there were no occupants in the house when the gate of the building was forced opened by operatives of customs to retrieve the smuggled vehicles.

The statement read in part, “Operatives of NCS Compliance Team, based on credible intelligence, trailed the movement of some smuggled vehicles from Maigatari, Jigawa State to a house at Magaji Rumfa, GRA Kano.

“On the 7th February, 2017, eleven vehicles, ten Hilux and one Land cruiser jeep were retrieved from the house at Magaji Rumfa GRA, Kano and taken for detention at the HQ of Customs Area Command Kano.

“The officers discovered there were no occupants in the house, hence the gate was forced opened to retrieve the smuggled vehicles. Investigations into the smuggling of the vehicles is still on to establish the true owner.”