“Sorry to everyone that missed me fighting,” Okolie tweeted. “The good news is a Won by KO in 20 seconds!! Bad news is I’m back in the cage for now.”

London-based Cave, 33, has now lost all three of his professional fights. 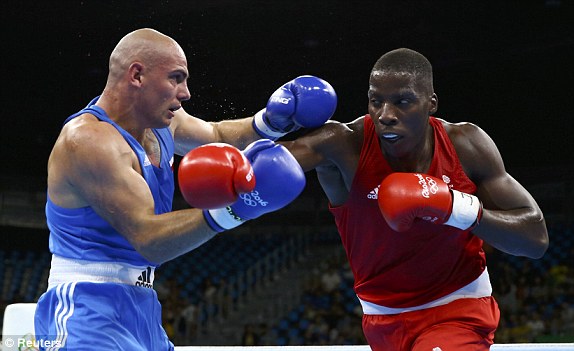 Okolie competed at heavyweight and lost to Cuban Erislandy Savon at the last-16 stage at the Rio Olympics.

He had boxed Savon once before and lost via a first-round stoppage, but at the second attempt he went the three-round distance with the Cuban who would eventually claim a bronze medal.

Okolie had explained that the likes of Joshua lured him into boxing.

“Before I started boxing properly I was working in McDonald’s, and I was watching the Olympics during my breaks whenever I could,” he told Sky Sports News HQ.

“It was the only thing to do! There was a particular break where Usain Bolt won the 100m then Anthony Joshua won gold. I felt something then.

“It was really inspirational. I started putting more work into training, and believing it more.”

Okolie hopes to become a world champion within four years and is scheduled to fight on the undercard of Ricky Burns’ super-lightweight unification bout with Julius Indongo on April 15.