Home Uncategorized Nigerian Prostitute stabbed to death in Ghana
Facebook
Twitter
WhatsApp
A Commercial  sex worker that goes by the name,Tina, was stabbed to death by a customer who accused the deceased of stealing his money.

Tina, who resides in Ghana, was murdered by a 34-year-old man, Isaac Sackey, for allegedly stealing GH¢120 after he had sex with her.

According to reports , Sackey reported to the police after stabbing Tina in the stomach and thigh.

Sackey was said to have approached Tina for sex at a drinking spot in Accra, where he had gone to have drinks with his male friends. The two were said to have agreed on a fee for the service before heading to Sackey’s house where they spent the night.

Narrating the circumstances leading to Tina’s death, Sackey told the Accra Regional Police Command that he had gone to the bathroom to freshen up at about 2am, leaving the woman in the bedroom. He claimed that when he returned he saw the Nigerian going through his belongings and realised that GH¢120 cash had been stolen.

The Command’s Public Relations Officer, Assistant Superintendent of Police (ASP) Mrs Effia Tenge, said that Sackey told the police that he immediately accused the woman of stealing the money but she denied it.

She said, “The suspect lives in a single room in some compound house at Spintex.

“In the course of the confrontation, the lady took a kitchen knife from the man’s room and threatened to stab him. But the man overpowered the lady and incidentally stabbed her after he managed to take back the knife from the lady.”

Tenge said Sackey locked his room and then went to the Psychiatric Hospital to report the issue where he was directed by the hospital authorities to report himself to the police.

She said police officers went to Sackey’s apartment where the body of the victim was found lying in a pool of blood. A careful assessment of the body by the police, she said, revealed that the victim had a knife wound in the stomach and on the thigh, indicating that she had been stabbed twice.

The body has since been deposited at the Police Hospital morgue for preservation.

The deceased is yet to be identified by the family since the suspect claimed it was the first time they had met at the drinking spot.

Some neighbours of the suspect claimed he had a mental disorder, but the police are yet to verify that information. 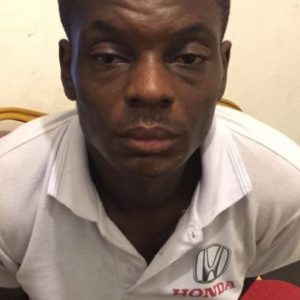